With funding from the U.S. State Department, the Thai governmental office for substance abuse prevention, the Thai National Control Board, has selected the Strengthening Families Program for dissemination in Thailand. Their first step was to form a collaboration with a research team headed by Dr. Methinin Pinyuchon from Taskin University in Songkla, Thailand who researched likely effective programs. Because of the Thai emphasis on families and fact that the Cochrane Collaboration Reviews and NIDA say SFP is a very effective program, she selected the 14-session version of SFP for high-risk families. For a year, Dr. Pinyuchon and team worked on the cultural adaptations following a rigorous cultural adaptation protocol just published in Evaluations and the Health Professions (Kumpfer, Pinyuchon, de Melo, & Whiteside, 2008). In Spring 2007, Dr. Kumpfer and Dr. Whiteside trained over 80 prevention specialists from all over Thailand to become certified SFP group leaders. Several SFP groups have been completed with good results. The Thai training team are now conducting their own trainings in the Strengthening Tai Families Program as shown in the attached picture. The long term goal of this Southeast Asian project is to eventually culturally adapt SFP for Laos. Vietnam and other Golden Triangle and Asian countries.

Dr. Karol L. Kumpfer, developer of SFP and Professor at the University of Utah, was recently retained as a consultant to support the efforts of the United Nations Office of Drugs and Crime (ODC) in Vienna, Austria on dissemination of evidence-based family approaches to drug prevention. A systematic approach is being taken that included creating an international expert work group of professionals and university researchers in parenting and family interventions worldwide. This expert group met at the UN in Vienna in October to discuss suggestions for a Guideline Protocol on ways local NGOs or family services agencies could select the best evidence-based parenting or family interventions matching the needs of their families and agency resources. The protocol also includes suggestions on how to culturally adapt the program and implement it in developing countries. These steps for culturally adapting SFP has already been published with Dr. Pinyuchon from Thailand, Ana de Melo, and Dr. Henry Whiteside.

Additionally, with support by the ODC program staff, Dr. Kumpfer and Ana Melo, M.D. in Portugal conducted an international search for evidence-based parenting programs worldwide. Over 180 programs have been located and their program developers have submitted research articles and program descriptions. These will be added to the UN ODC website and Dr. Kumpfer’s web site www.strengtheningfamilies.org after expert reviews this summer of their levels of evidence of effectiveness to be made available for community agencies and governments worldwide.
Karol to add picture and link to UN website about initiative.

For descriptions of the prior expert review process used to determine the 34 evidence-based parenting and family programs for the Strengthening America’s Families web site for the federal government offices of the NIJ Office of Juvenile Justice and Delinquency Prevention and SAMHSA’s Center for Drug Abuse Prevention (CSAP) see Kumpfer and Alvarado’s 2003 article in the American Psychologist or the criteria for review use listed on www.strengtheningfamilies.org 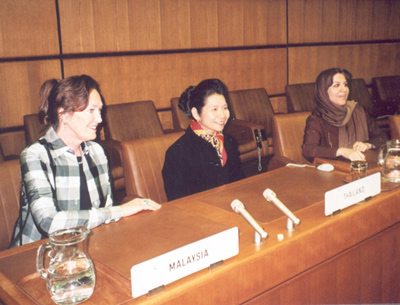 Dr. Kumpfer presented last January to the White House Office of National Drug Control Policy (ONDCP) as part of the Advisory Board of Dr. Kerby Alvy’s National Effective Parenting Initiative (NEPI) on the importance of targeting parents in media campaigns. Luckily the ONDCP media contractors who were in attendance and with support of ONDCP’s Robert Denniston, Director of the National Youth Anti-Drug Media Campaign, listened and launch their first major Federal effort to educate parents about teen prescription drug abuse.

This national public awareness campaign began with advertising during this year’s Super Bowl, and is ONDCP’s first paid TV advertising targeting parents in nearly two years since highly successful Parents the Anti-Drug media campaign. Their prior effort was also designed by ONDCP’s former Director, General Barry McCaffrey, after being presented data by Dr. Kumpfer, Director of SAMHSA’s Center for Substance Abuse Prevention (CSAP) on the importance of parents in preventing drug abuse in their children. The new media campaign effort includes broadcast, print, and online advertising, community outreach, and new print and online resources to help parents and communities combat the troubling trend of teen prescription drug abuse. The Administration will leverage $14 million to generate nearly $30 million in advertising. The ads were made in collaboration with the Partnership for a Drug-Free America (The Partnership), with pro bono creative provided by Draftfcb New York. Watch for more of these ads targeting parents to help prevent prescription medication abuse in your community.

For more information for parents and practitioners about this important media campaign and the important role parents play in drug prevention, go to http://theantidrug.com/pdfs/prescription_report.pdf 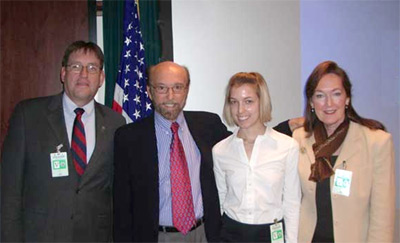